Thomas DeVore, the Greenville attorney behind several high-profile legal challenges to the state's COVID-19 mitigation strategy, announced Monday evening that he wants to be Illinois' next attorney general.

The attorney general acts as the state's chief legal officer. The office represents the state in court, defends state officials, prosecutes some crimes, advises the governor and oversees the office which enforces government transparency laws, among other duties.

Primary elections in Illinois will be on June 28, with the general election to decide the next attorney general on Nov. 8.

He has close ties with some of the legislature's most conservative members. In 2020, DeVore represented Sen. Darren Bailey, R-Xenia, in a lawsuit over Gov. JB Pritzker's use of executive orders and is currently representing Rep. Blaine Wilhour, R-Beecher City.

Despite this, DeVore said he is typically apolitical.

"I don't care for politics much," said DeVore in a video posted on Facebook Monday evening. "I don't much like politicians." 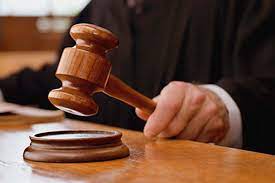 DeVore's lawsuits have had mixed legal success. His first major COVID-related lawsuit, representing Bailey in a legal fight over executive authority, ended without any change in policy.

Bailey is currently running for governor.

DeVore has an ongoing lawsuit against the state over schools' ability to enforce mask requirements, teacher vaccination rules and "exclusion" practices where students can be barred from school if they've been exposed to COVID-19.

That suit is currently in the appeals process, with Gov. JB Pritzker saying he is seeking an expedited review at the Illinois Supreme Court.

It was this lawsuit that DeVore said inspired him to run for attorney general.

"I've been watching over the last month parents and their children trying to stand up for their beliefs," said DeVore.

His most recent COVID-related lawsuit focuses on the ability of the General Assembly to require lawmakers to wear masks. Wilhour was removed from the House last Thursday for refusing to put on a mask, later joining via Zoom. He was also removed on Tuesday for the same reason.

DeVore formally filed paperwork indicating his run for the office on Tuesday morning. Records from the state board of elections show that he lent his campaign organization $5,000 last week.

He said that issues of personal liberty are important to him as well as having a statewide official who can stand up to an overreaching executive. DeVore said if he is elected and the governor attempts to use a similar policy strategy to Pritzker, he would take action.

DeVore joins Steve Kim in the Republican primary election for attorney general. Kim is a business attorney who was an adviser to former Gov. Jim Edgar. Kim is running alongside a slate of Republican candidates. Aurora Mayor Richard Irvin and Rep. Avery Bourne, R-Morrisonville, are leading the ticket as candidates for governor and lieutenant governor, respectively.

Whoever wins the Republican primary for attorney general will likely face off against incumbent Kwame Raoul, who is currently running unopposed.

Raoul was among 47 other state attorneys general who sued Facebook in 2020 over anti-competitive practices. In 2021, he and 53 other attorneys general successfully sued consulting firm McKinsey for its role in propagating the opioid epidemic.

Democratic Party officials have already come out swinging against DeVore.

"For nearly two years, Tom DeVore has used the pandemic as his personal publicity tour, filing countless absurd and frivolous lawsuits in an attempt to grab headlines, enrich himself and undermines our state's public health apparatus," said Democratic Party of Illinois Executive Director Abby Witt in a Tuesday statement.

Past coverage:Who is running for secretary of state? Here's a look at recent race developments

DeVore is not the only statewide candidate to make news this week.

Chicago City Clerk Anna Valencia earned several high profile endorsements in her bid for secretary of state. The office's former head, Jesse White, is retiring after more than 20 years in the office, leaving the field wide open for a new person to take over.

"I have known Anna for many years," said White in a statement. "I am impressed by her energy, commitment to public service and her dedication to getting the job done."

Valencia has also earned the support of both of Illinois' U.S. senators, Democrats Dick Durbin and Tammy Duckworth.