Illinois Lawmakers vote themselves a 17% pay hike, to $85K, even as their constituents struggle.

Are you getting your money's worth? You might ask yourself that question now that Illinois lawmakers have just given themselves a 17 percent raise for 2023.

Over the past several years lawmakers have done nothing to fix pensions, property taxes, or out-migration, while actively making Illinois' schools, crime, and business climate worse. Not to mention Illinois currently has the nation’s second-highest unemployment rate and jobs are less plentiful today than when Gov. Pritzker took office.

Based on all that, Illinois lawmakers deserve a pay cut or worse.

Instead, they've just passed for themselves a massive pay increase. In yet another lame duck, partisan-line vote, Democratic lawmakers in both chambers voted to boost legislative salaries by nearly $12,000. That pushes up pay for lawmakers – still a part-time job – to $85,000.

Illinois lawmakers were already the nation’s fifth-highest paid legislators in 2022. The increase will raise them to the 4th-highest nationally and make Illinois extreme among its neighbors. 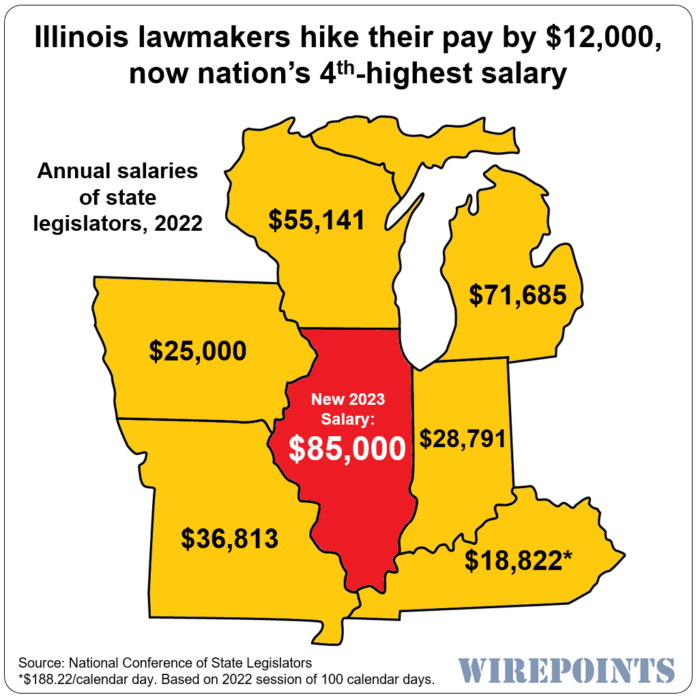 You can bet ordinary Illinoisans aren’t getting 17 percent pay hikes even though their pay is far lower. Worker earnings were basically flat from 2019 to 2021 when taking inflation into account, while the median across the state was only $41,504, according to the U.S. Census Bureau. Pay is even lower in many areas. Take Rockford, where median earnings were just over $30,000 in 2021. The earnings are similar in towns like Peoria, Decatur and Cicero. Even in Chicago, median earnings are just $43,000.

And base salaries are only a part of lawmaker compensation. There’s $11,000 to $30,000 in stipends for lawmakers in committee and leadership positions, additional per diem payments, subsidized health insurance, and, of course, guaranteed lifetime pensions.

It’s a perfect illustration of the two-class system at work in Illinois. Lawmakers vote themselves guaranteed raises on top of their guaranteed pensions, while forcing private sector workers, who don’t make nearly as much nor have any such guarantees, to pay for them.

Join us in pushing back against Illinois' failed policies. Share this piece and encourage others to sign up for Wirepoints' newsletter.